Lye himself said in 1964, that “great architecture goes fifty-fifty with great art.” The building’s design articulates this philosophy – he believed an artwork was a piece of consciousness communicating with the future. He used light as his primary medium.
The Len Lye Centre is situated in Taranaki, New Zealand, a region known for its stainless steel production industries. The 3,000 sqm (32,292 square feet) building engages with the urban square via a light reflecting and transmitting façade. This transfers light in a holographic effect from one place to another to enliven and activate both.

“[Len Lye would] be absolutely thrilled, he’d be dancing around in this place.” John Matthews, Chairman, Len Lye Foundation

The Len Lye Centre is designed to fulfil multiple requirements. It needed to integrate with a proposed new art and cultural precinct, which links through to the commercial heart of the city. It also needed to seamlessly merge with an existing heritage Art Gallery facility in a converted movie theater. The finished building introduces new gallery spaces, education studios, a 62 seat cinema, the Len Lye Archive and a dedicated motor room for his kinetic works. The resulting space is reverential, creating a sensory experience from light as a ‘temple’ for art.
“Lye was fascinated with temples and in conceiving the overall design it seemed appropriate to draw inspiration from the “megarons, or great halls, of the classical world, as well as from Polynesian forms and ideas. These ideas also influenced Lye. To do this, we developed our thinking in a holistic or adaptive way; as a systems methodology. This ment that rather than using proportion or aesthetics, we used patterns in the ecology of the project’s environments to drive the design elements. For example, the shimmering, iridescent colonnade façade is manufactured locally using stainless steel - Taranaki’s ‘local stone’ – this links both Lye’s innovations in kinetics and light as well as the region’s industrial innovation. So by using stainless steel we can celebrate and communicate to visitors the reason for the fortunate gift of his art works to Taranaki.”
says Andrew Patterson, director, Patterson Associates

The façade of the Len Lye Center inside and out | Patterson Associates | Photo ©Sam Hartnett (left), ©Patrick Reynolds (right)

The façade’s deeply pocketed shape provides a series of images or reflections and attracts people to the facility as a result. Viewed from above, the colonnade’s top edges create a local koru form, displaying the Museum’s Polynesian influences.

Inside the building, the colonnade creates a theater curtain, with three asymmetric ramped sides embracing the space of a processional journey ascending along a ramp into various galleries. There are divisions in the circulation. Light is drawn inside through the apertures in the colonnade, and these create moving light patterns on the walkway, perhaps a form of passive kinetic architecture.

Teamwork and the modern colonnade

Patterson Associates’ 28-member team is united and motivated by architectural innovation, bringing their diverse expertise together to collaborate. A broad range of disciplines come together in their architectural work. Each project comes from selecting individual talents to create the right ‘super team’ for particular projects. For the Len Lye Centre, four out of the practice’s 14 ARCHICAD users formed the super team working together closely using ARCHICAD’s Teamwork.

The façade of the len Lye Centre consists of 20 monolithic 14 meter-high curved, pre-cast concrete columns. Their exterior surfaces are clad in highly polished stainless steel curtains with glazing hidden in between each column. The shapes of the columns are designed to reflect light through these into the building according to the time of day and reflect light back out at night. Scale, materials, light and atmosphere are composed as in a film to activate the senses and incite a poetic dimension. The façade acts as a kind of living object connecting the outer and inner spaces it divides.

Starting the project in 2010 with ARCHICAD 14, the design team’s biggest challenge was the modeling of this façade. Due to the complexity of the geometry they used Rhino to model single façade shapes, then exported to ARCHICAD to link the modules together. Later, when ARCHICAD 15 and 16 were introduced, the façade was remodeled using the Shell and Morph tools.

The design team built a detailed, live, 3D model, integrating the 3D structural and MEP elements as well. This model was used to extract all of the project documentation, to communicate the design intent towards the client, and to clarify construction issues during the two years of construction.

“BIM is a tool that we use to communicate with stakeholders, with the builders, with everybody connected to the project. It’s a leadership tool that enables us to deliver the project.” Andrew Patterson, Director

The role of OPEN BIM in the design and construction

Pattersons recognized early on the importance of a strong OPEN BIM foundation for their design and construction workflows.
OPEN BIM was fundamental in working out the complex geometry of the building in three dimensions, ensuring a seamless transition between consultants from design to manufacture.

Once the geometry of the façade was ready in ARCHICAD, it was exported to Ecotect 2011 in conjunction with Radiance to document sun path reflections. The architectural model of the colonnade columns was transferred directly to the pre-cast manufacturers, while the light transferring effect was tested on site with real size sample elements.

Setting protocols early in the project between BIM managers of each consultant was key. As this was a test project using the IFC translator for some of the consultants, a number of demo models were exchanged between consultants to confirm that future exchanges would be seamless. OPEN BIM data exchange was implemented and data shared on a weekly basis.

“The function of IFC open file format has greatly eased the collaboration process between the architect and the engineers.” Shane Taylor BIM Manager, Pattersons

BIMx on the construction site

Since the Len Lye Centre was fully modeled, it was an easy and natural step to generate a BIMx model from it containing all the 2D information available in the model. Patterson Associates has used BIMx since the day it first came on the market.

“The Len Lye Centre’s BIMx model was used during site inspections, while the builders used it when making site rounds, allowing them to visualize the building three dimensionally when resolving complete junctions. And the tool also came in handy when the client required simulations on how the designed museum spaces would work in specific event scenarios.” Says Shane Taylor, BIM Manager, Pattersons.

“This is a fantastic tool that openly and interactively explores 3D Building Information Models on mobile devices.  It saves us from having to carry big paper files to the site!” Shane Taylor BIM Manager, Pattersons

An art gallery project always requires a highly-serviced environment, resulting in very high MEP – mainly HVAC – costs, which can be as high as 25% of the total building cost. ARCHICAD was indispensable when Pattersons value-managed the project due to funding difficulties they were able to coordinate the various HVAC engineers and sub-consultants to reduce that cost significantly just by the way the ducting worked through the building.

The very strict international artwork loan standards narrow down the environmental range the museum has to comply with. With an art museum this size, this usually means two to three plant rooms. Once Pattersons decided to move from the initially planned two plant rooms to one, they could implement this change very quickly via the exchange process between consultants, saving a major portion of the building budget. 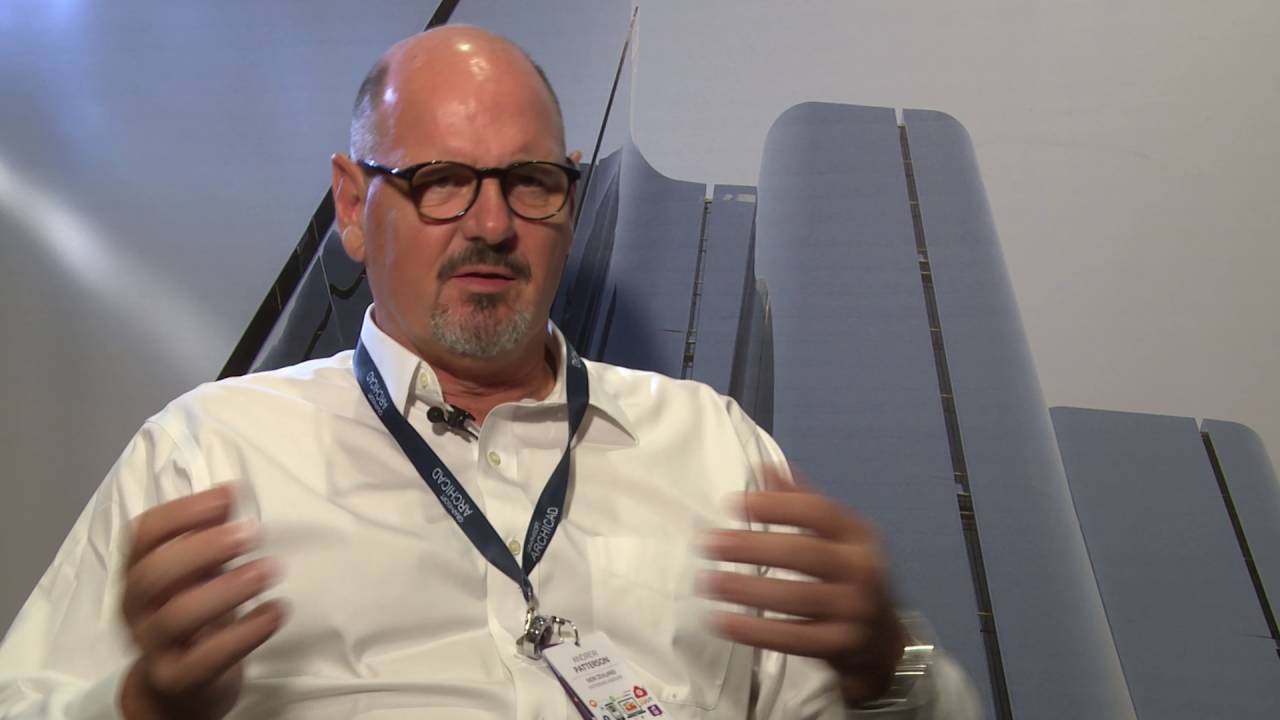 By using state-of-the-art BIM tools, Patterson Associates have created a concept design that has resulted in a breathtaking, inspiring building, reaching far beyond the borders of New Zealand. Tasked with a number of requirements, the Len Lye Centre is a building for the future, firmly rooted in the community and the vision of the artist who inspired it.

Patterson Associates is a New Zealand practice. Its philosophy is based on a very simple idea: if a building can feel like it naturally ‘belongs,’ or fits logically in a place, to an ecology, a time and culture, then the people that inhabit the building will likely feel a sense of belonging there as well. This methodology connects theories of beauty and environment. As well as its New Zealand work, Patterson’s have clients and projects as far afield as India, Singapore, Australia, Germany and China.